My daughter's  birthday celebration continues with a trip to the Ringling Brothers Barnum and Bailey Circus.

Establishing traditions that my daughter will remember when she is older is extremely important to me. I had wanted to continue the tradition of taking her to a Broadway show for her birthday (last year we went to see Mary Poppins) but nothing really popped for me this year.  I had thought of taking her to see the Lion King (which I loved) but thought that I would wait for her eighth birthday.

Then I received a mailer from Ringling Brothers Circus (see marketing folks, direct mail still does work) and aha, I though why not, she has never been to the Ringling Brothers circus and frankly, I hadn't been in over twenty years.

We arrived early for the pre-show access. After the maddening crush to get in, we headed for the floor where you can get up close and personal with some of the acts from the show including the elephants. That was really cool, I must admit, we got to see some of the clowns, men on stilts and my daughter was able to try on costumes.

Onto the Big Top Show. This year's production commemorates P.T. Barnum's 200th birthday (who knew.)
Although, I haven't seen a production in over twenty years, it was truly a three- ring circus and quite the grand spectacle as advertised and for which the circus is famous.

I loved Ringmaster, Jonathan Lee Iverson, who has the most magnificent voice, exquisitely suited for the Big Top.  Along with the numerous funny clowns and pretty showgirls types, there were two outstanding acts that impressed me. First, was the  Flying Caceres family whose claim to fame is the quadruple somersault which they did not make at our show but were incredible, nonetheless and second, was the Torres family who are seven daredevils who ride their motorcycles inside this large steel sphere - all at 65 miles an hour and all at the same time. I have no idea how they stay focused and riding at the same time without crashing but it was amazing to watch.

I would be remiss if I did not mention the parade of elephants. It's is quite a "wow" to see them all lined up doing their act in all three rings.

My daughter really liked the circus especially the Torres family riding their motorcycles and the animals. Who wouldn't love tigers and elephants.

Finally,  I have to pat myself on the back in that I did not succumb to buying a toy. Buying the food was enough to break the bank.  $5.00 for nachos or popcorn, okay but $5.00 for bottled water is just plain criminal. 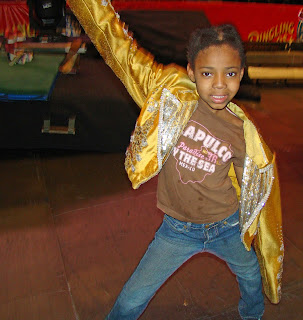 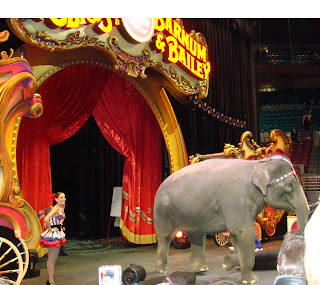 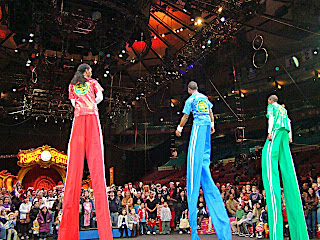 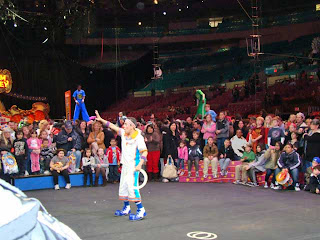 Disclosure: Tickets were paid for by me.
Posted by NYC Single Mom at 2:24 PM