Getting My Exercise In - Running of the Bulls (oh I mean, Buses) 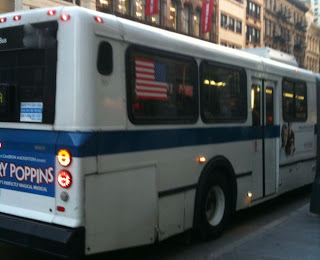 A few months back, I chronicled our morning routine "Walking to School - Living in the Moment."   The routine chronicled in that post takes place in the warmer months.

Now that the weather has grown colder, we now have to take the bus. Personally, I rather keep walking because I need the exercise and I save $5.00  (bus fare is now $2.25 each way.) Unfortunately, dealing with a 6 1/2 year old child whining about the cold is just not worth the mental aggravation so we take the bus.

You would think that taking the bus would simplify our morning routine but alas you would be wrong, it has only added to the craziness of getting my daughter up and out the door so we get to school on time.

Why??? Because unlike the rush hour subway schedule when trains come every few minutes, the New York City buses are notoriously late. If we want to get to school on time, we actually have to leave our house fifteen minutes earlier in order to make a bus before 8:00 am, otherwise you are screwed because to wait even until 8:05 means we won't make it and we get the dreaded late pass which goes on my daughter's school records.

Getting my daughter out the door fifteen minutes earlier is not bad enough, we have now taken to literally running down the block and across the street (sometimes as the blinking light is signaling that it's going to turn red) so that we don't miss that last bus.

So whether I want to or not, I am getting an early morning cardio workout. At least, it goes to the 10,000 steps we are supposed to get in every day.

What I find the most amusing thing is that my daughter finds the running of the buses, fun.
Posted by NYC Single Mom at 12:28 PM I love this post! Living in New York can be a pain in the ass when it comes to transportation. I was commuting from Staten Island, and my ass was always running! Buy One, Get One Free* Ticket at Leonard Da Vinci's Workshop Exhibit